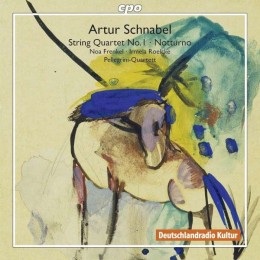 In 1901 Schnabel gave his very successful piano début, playing his own Piano Concerto with the Berlin Philharmonic. Hardly had he turned 21 than he achieved his final breakthrough with his rousingly acclaimed performances of the Brahms concertos. Later he founded the Schnabel Trio. He keenly followed new developments in contemporary music and was familiar with Schoenberg’s works long before they achieved recognition. This left a mark on his own music, which invariably belonged to the avant-garde of its day. His Notturno for low female voice and piano (1914) was premièred by his wife Therese Behr-Schnabel in 1918, probably with Schnabel himself at the piano. It was the first work he composed after a long hiatus, and it stands at a new stylistic threshold. If the works of Schnabel’s youth were beholden to Brahms, here he abandons functional tonality and the straitjacket of time signatures. Though the piece owes something to Mahler, Busoni and Schreker as well as Schoenberg, it is completely independent in its handling of form, phrasing and musical logic. Schnabel’s First String Quartet (1918) is a large-scale piece that clearly reveals the outline of classical four-movement form. But the thematic workmanship is now merely a pretext for events that hover around an ‘episodic centre’. Schnabel’s greatness as a composer is apparent in the constructive criticism that his music brings to bear on the outdated criteria of musical coherence.