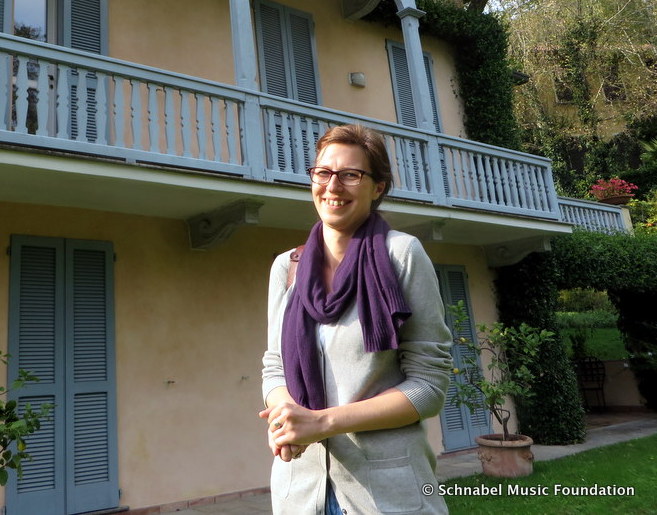 Britta Matterne in front of Villa Ginetta, Tremezzo, Lake Como, September 2015, where the Schnabels lived from 1933 to 1938.

Beginning in 2014 Britta Matterne has been working on preparing an edition of the correspondence between Artur and Therese Schnabel. Ann Schnabel Mottier is coeditor. As work on this subject has grown substantially beyond the originally envisioned scope and Britta has shown extensive knowledge about both Therese and Artur Schnabel, great enthusiasm, responsibility and commitment, the Schnabel Music Foundation has promoted her to Production Manager. She will be responsible for future publication projects.

Britta Matterne is a native of Hambug, Germany. She studied Musicology and Romance Languages at the University of Hamburg. Her thesis for the Magister title (roughly equivalent to a Masters degree) had Therese Behr Schnabel as subject.

Ann and François Mottier have been working with Britta extensively. In the summers of 2014 and 2015 Britta spent time with them at Lake Como, Italy, and in the Engadin, Switzerland, to gain first hand experience of where Artur and Therese Schnabel, together with their sons, lived in the 1930’s and 1940’s. Britta has also traveled to Connecticut, and in the spring of 2015 she researched original documents in regard to Artur Schnabel at the archives of Yale University, the Frick Collection in Manhattan (NY), and other libraries.