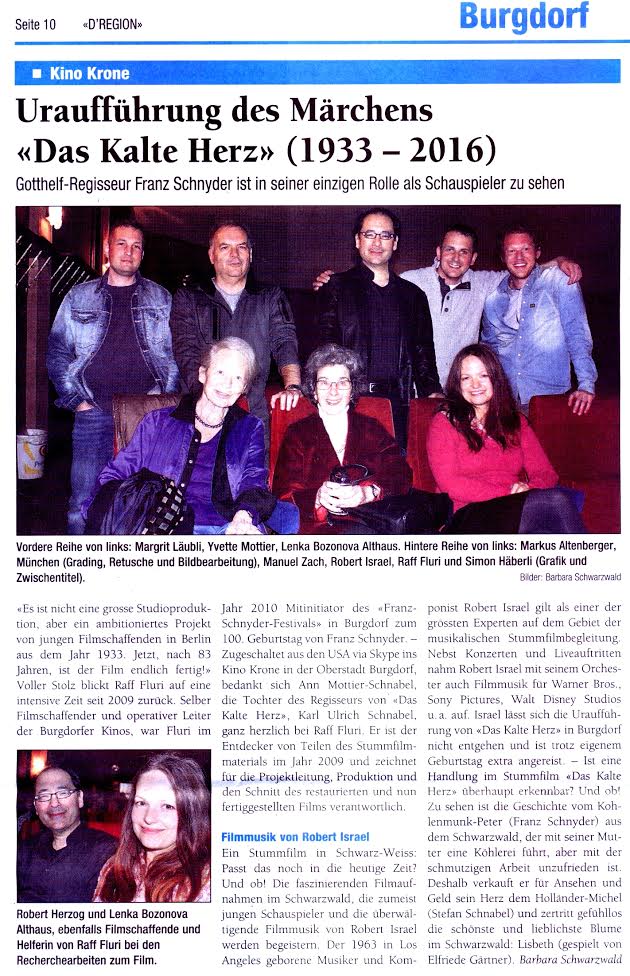 Newspaper review of the private showing of  Karl Ulrich Schnabel’s film “The Cold Heart,” in Burgdorf, Switzerland. The front row in the photo shows from left: Margrit Läubli (famous Swiss Cabaret actress), Yvette Mottier, Lenka Bozonova Althaus; back row:  Markus Altenberger (image restoration), Manuel Zach, Robert Israel (film music), with Raff Fluri and  Simon Häberli (graphic designer).
Karl Ulrich Schnabel was an avid film buff all his life.  When he was just over twenty years old he acquired a film camera and started to experiment with it.  In 1932/33 he wrote a script for a film version of the Wilhelm Hauff fairy tale “The Cold Heart.” With his friends and family serving as actors, extras, and stagehands he directed a silent full feature film.  After the flight from Berlin in 1933 the film lingered in Berlin until it was discovered by Raff Fluri, a young film director in Switzerland. Now the film restoration has been completed.
On Saturday, April 30 the completed film by Karl Ulrich Schnabel was shown for the first time to the sponsors, funders and collaborators.   Robert Israel, noted musician and film music creator, who composed and directed the sound track for the silent movie had arrived from the Czech republic. Ann Schnabel and Francois Mottier joined the event in Burgdorf (near Berne) in Switzerland via Skype to greet the audience and to wish Robert Israel a happy birthday.  At the end of the movie Ann Schnabel was again available via Skype to answer questions about the movie.
Loading Comments...