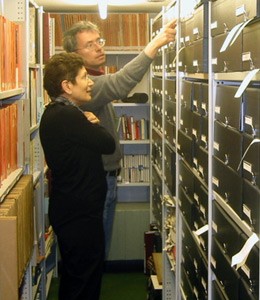 The Akademie der Künste (Academy of Fine Arts), Berlin, has established an Artur Schnabel Archive that includes almost the entire estate of the pianist, composer, editor and teacher Artur Schnabel (1882 – 1951). At the same time, personal archives of all the artistic members of the Schnabel family have also been set up. Schnabel, who moved from Vienna to Berlin in 1900 and stayed until the Nazis seized power in 1933, was one of the musical figures to make the city a leading center of music during the first decades of the 20th century. Through his recordings and editions as well as several generations of students, the Schnabel tradition has been kept alive all over the world. Even today the unique blend of control and freedom that defines his art of interpretation is both exemplary and inspiring. Furthermore, it was Schnabel who expanded the standard repertoire to include the late sonatas by Schubert and introduced the complete performance of the 32 sonatas by Beethoven in a concert series, a practice common today in larger music centers. Yet he was also active as composer of orchestral music, chamber music and Lieder – an aspect of Schnabel’s artistic legacy which through numerous new recordings has recently begun to arouse renewed interest in Europe and the USA.

On the occasion of the fiftieth death anniversary of Artur Schnabel a significant selection of archive material was opened to the public in an exhibition in Berlin during September through mid October 2001. At the same time a series of fifteen concerts presenting compositions by Schnabel was scheduled as part of the Berlin Festival 2001. Finally, the Archiv der Akademie der Künste, in cooperation with the State Institute for Music Research, Preussischer Kulturbesitz, organized an International Schnabel Symposium in the Museum of Music Instruments from September 7 to 9. Scholars, former students of the Schnabel pianists, and members of the Schnabel family presented papers on Schnabel as interpreter, composer, music editor and teacher, as well as on other artists in the Schnabel family. A second focus of the conference was the piano-performance teaching of Karl Ulrich Schnabel, Artur Schnabel’s son. The concluding presentation was the world premiere showing of a documentary film “Con Brio – KARL ULRICH SCHNABEL – Master Teacher of Piano .”

The Archives of the Academy of Arts has established separate collections for all musicians in the Schnabel family: Therese Behr Schnabel, Helen Schnabel, and Karl Ulrich Schnabel.

The Library of Congress also holds a significant collection of Artur Schnabel’s documents and recordings. They are located in the Music Division, Library of Congress, Washington, D.C. Below are some of the entries found on the L.o.C. web site: